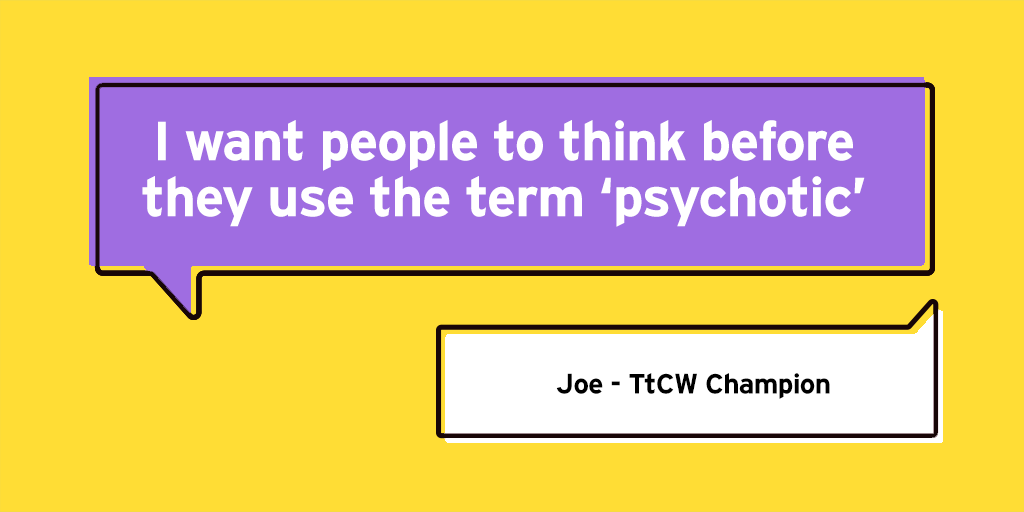 I am writing this blog as I want people to think before they use the term ‘psychotic’ when talking about people who are dangerous and even murderous. I have bipolar and have suffered two episodes of psychosis myself and find this incorrect use of this term both hurtful and dangerous.

In my day to day life I am lucky not to suffer from stigma from friends, family and colleagues. However I see the term ‘psychotic’ being used as a stand-in for dangerous almost on a weekly basis. It’s used in the news, magazines, music, films, TV, radio, podcasts, and social media. It is everywhere, and the vast majority of people who use it will have no idea what it is like to suffer from psychosis.

A quick Google search will give you the definition of psychotic: adjective ‘relating to, denoting, or suffering from psychosis’ or noun ‘a person suffering from a psychotic disturbance’. It does not mean that person is going to hurt anyone. Below I describe my experience of having psychosis.

When I had psychosis I was not a danger to others, in fact if you met me during that time you might have even had a hug from me. This is not to say that it is easy to see someone going through psychosis. I had rapid racing thoughts, paranoia, delusions, hallucinations, severe lows, and delusional euphoric highs. It was a terrifying experience for me and very difficult for my family as they felt helpless in trying to help me through it. Psychosis felt like being trapped in a waking nightmare and I would never wish that experience on anyone. Despite how difficult it was, my local mental health crisis team, my family and friends really helped me and I was incredibly grateful for their support.

There are two main reasons why I think the term ‘psychotic’ needs to stop being tagged together with killer, murderer and other horrible terms.

The first is the effect it has on individuals going through an episode of psychosis. At my lowest point I became convinced that I was an evil person who had murdered people. I have never and would never hurt anyone. The feelings of guilt and shame that come with psychosis combined with the societal stigma convinced me that because I had feelings of guilt I must have done something very bad. I was so convinced that I phoned the police and told them that I had murdered people and needed to be arrested. Luckily my wife was in the house and overheard me talking to the police. She asked to speak to them and explained the situation. However as I had said I did something the police still needed to check on what I had said. They obviously found that the people I thought I had murdered were still alive and well. They were very patient and understanding and sent an officer to talk to me about it and reassure me that I had not done anything wrong. Unfortunately this had wasted police time looking into a crime that never happened. If the media didn’t throw the term the ‘psychotic’ around so readily I do not believe I would have got to the point where I was convinced I had done such a terrible act.

The second reason is the damaging effect it has on those of use who have suffered with psychosis. My last episode was in 2017 but I still suffer with flash-backs to the vivid nightmarish thoughts and delusions I had at the time, despite having taken part in several courses of therapy. For a while I was reluctant to open up to people about having psychosis, and my sick notes for work actually said ‘depression’ rather than psychosis. The stigma attached to psychosis can make it very difficult to recover. The therapy I have received has mostly helped me cope and recover but when I see ‘psychotic’ being used to describe murderers it brings back those feelings of guilt and shame.

I would be so grateful if I could enjoy films, music and reading without having to be reminded that society thinks I am a dangerous person. If people truly understood what having psychosis was like I do not believe they would be so ready to throw this word around.

What is mental health?