We are pleased to announce that we are now open for applications to become a TtCW Champion. We have refined our training so that we can begin to deliver it virtually, via Zoom with training dates coming up in June and July 2021. 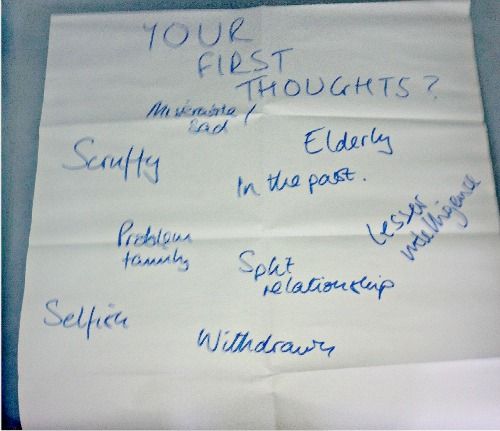 Challenging beliefs and pre-conceptions regarding depression

My first blog for Time to Change Wales was all about my preparations for a presentation to help raise awareness of mental health issues in my work place.

My first blog for Time to Change was all about my preparations for a presentation to help raise awareness of mental health issues in my work place.

I can happily report back to you that I have survived! Not only that but, overall, it was a success with staff who were honest with me and with whom I was honest with in return. It helped start a conversation that the majority were unsure of prior to the presentation, given the unspoken taboo surrounding mental health in general. Nevertheless, the main message that came from it was that the job is not even half done!

I began the presentation by giving everyone the chance to shout out their very first thoughts when the word ‘depression’ is mentioned. The responses? There were, of course, the classics - ‘miserable,’ ‘withdrawn’ and ‘problem backgrounds.’ However, I must admit being a bit taken aback by the likes of ‘selfish’ and ‘less intelligent’!

I guess it all boils down the common misconceptions portrayed through the media and society, and the consequences of misunderstanding in approaching the subject through everyday life. I took a step back and decided to probe as to how thoughts such as ‘selfish’ were justified by my colleagues. For them, it was the fact that right down to watching soap operas from an early age, characters were simply portrayed as lazy or unwilling to help themselves. How is this manifested in dealing with real people? ‘Snap out of it!’

This was the point in the presentation where, along with the help of my line manager, it was explained to staff how I was putting in place the actions discussed with my Occupational Therapist and to convey the lengths to which I’m going to fully recover, and in turn help colleagues. Yet this is just my individual circumstances. Millions of others will not feel the confidence to put their recovery out there for people to see. It makes them no lesser for it too. Everyone suffering from mental health issues have their own way of recovering. Unequivocally, none of us have chosen to suffer. It’s not a choice. We can however recover.

Unequivocally, none of us have chosen to suffer. It’s not a choice. We can however recover.

This is the point where I begin thinking of those next stereotypical thoughts, in that depression appears to afflict those of lesser intelligence. I am not going to claim that I have any scientific knowledge of the demographics that make up those who suffer with mental health issues and their IQ scores. However, I fail to understand how the symptoms of depression- quite often over-thinking and for me personally, gaining the cynicism that has enabled my low moods to be so sustained - is a sign of lesser intelligence. Need I really point to the case of Stephen Fry- an extremely intelligent individual who has suffered for many years with his own mental health issues?

Yet, despite my focussing on these ultimately small pieces of the jigsaw that make up mental health stigma is concentrating on the negatives. The main positive that I have to take from my presentation was the willingness of everybody in the room to challenge their own beliefs and pre-conceptions. Come the end of the meeting, every single person was wearing an ‘End Stigma’ badge courtesy of TTCW. Hopefully, going forward, at least the eight people I spoke to at work, will go forward without the stigma and encourage others to also look at things differently.

In my previous blog I spoke about letting people ask questions to help you challenge their stigma. I put this into practice with my colleagues and I do feel that, to a large extent, their stigma was quelled. It’s only a small step. We can all do the exact same thing, either by becoming a TTCW champion, or for those not so confident even by speaking to your closest friend. The chances are that even though they are undoubtedly there for you, they also have their own conceptions of mental health. If they go on to suffer similar issues in later life, or indeed if a member of their family does, would they be happy with the challenges they have to face given the stigma we encounter from day to day?

I’m fairly certain the answer to that is no. We all want to improve life for future generations. Just by signing the pledge to end stigma, you will be playing your part.

Thank you this Volunteers' Week 2021

Our Champions are at the very heart of the Time to Change Wales Campaign. Indeed, we simply couldn't do what we do, without these courageous volunteers.