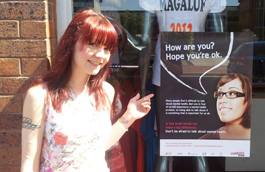 I am not my diagnosis

I guess the hardest thing was that others could see something was wrong but they just seemed to make out because I was harming myself I wanted attention.

I have been suffering from a range of mental health problems from an early age without even really knowing it. I guess the hardest thing was that others could see something was wrong but they just seemed to make out because I was harming myself I wanted attention. In fact, I wanted anything but attention, I wanted to hide, never to be seen, I think that was the shame of what I was doing to myself.

Looking back now I know I was discriminated against even at high school, girls would make rude comments about my arms or laugh at me that I never did P.E because I didn’t want people to see my pain on my arms. Now I know that was just ignorance though.

It seemed to me that for my family, dealing with me was too difficult. Remarks would be made like ‘stop being silly’ and ‘get a grip’, I guess they just had no understanding over what I was going through and for me that made it so much harder because I had no understanding either. I just knew I was in great pain and wanted it all to stop.

Many years have passed now since that time and I have a greater understanding over my issues and mental illnesses as a whole, yet I am still subject to awful comments by friends, family and even people within the mental health field (the last thing you would expect from people trained to deal with mental health problems). I guess my most memorable comment would be from an A&E nurse who once said to me whilst having a needle to numb for stitches (I was petrified of needles) ‘what are you being so fussy about, look at the state of your arms, this is nothing compared to that’. I never imagined someone in a health field could be so cruel and could make a traumatic experience even more detrimental to someone’s mental health and wellbeing. Time to change Wales are doing amazing things and I am proud to say that I wear their end stigma badge everyday and am frequently asked about it. I am so passionate about stamping out stigma and discrimination against mental health that some days it’s literally all I can think about. I guess that’s why I set up my campaign Kim’s Voice, in memory of my late sister who committed suicide in 2009. The campaign is not only about ending stigma and discrimination but fighting for better mental health services in the UK. You can find us on Facebook and Twitter.

The more we make people aware of mental health the less people are going to be made to feel small or horrible about having such issues. Stigma and discrimination doesn’t have to happen, I am not defined as a person by my diagnosis, it does not make me ‘crazy’ or ‘insane’ it just means I have had to fight harder to reach this point in my life, a 20 year old strong and intelligent person who will always dedicate her time to helping within mental health however she can and stomping out stigma and discrimination within that.

On mindfulness in schools: the importance of mental health for our future generations

After experiencing burnout and intense anxiety, Victoria developed a 'toolkit of mindfulness' and a positive psychology which transformed her mental health