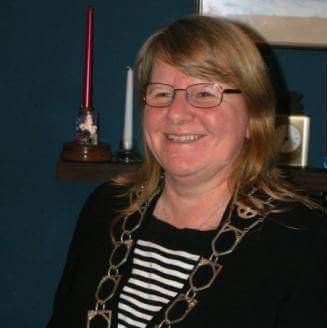 "The future was a place of terror where dreadful things happen."

I don’t need to bungee jump or go on roller coasters, I can get can get that sort of adrenaline rush from just walking into a room. I’ve always been the same. Mam says that I burst into tears every time someone new looked into my pram. Sometimes they didn’t even have to be new.

I wasn’t diagnosed with anxiety until my second serious bout of clinical depression in my 30s. I read everything I could find on the subject and my life suddenly started to make sense.

Let me try to explain how I feel. Before I found healthy ways to cope I was in frequent state of panic. The future was a place of terror where dreadful things happen. When my parents went out for the evening they were sure to have a car crash and

never return. The nuclear bomb was going to be dropped and we’d all be in a living hell. Bob the dog was going to die, and I’d have no friends. This was all before I was 7 years old. I didn’t talk about it. These were ‘silly’ thoughts. Self stigmatization had begun. Anything, or anyone, new was a problem. Basic things like starting a conversation felt like mountains to climb. But how can you say that you’re scared of such a basic human activity? It got worse as I got older. I did badly in my ‘A’ levels because I was physically incapable of approaching a teacher to say that I didn’t understand something. When I’m in that state it’s like there’s a huge lump in my chest that stops my voice. Strangely, at the same time I could happily take part in the debating society – that wasn’t the real me, I was playing a part so it didn’t count. I managed to get onto a degree course, but got so far out of my depth that I eventually dropped out. All I had to do was speak to my tutor about the things I didn’t understand, but that was too scary to even consider. I had frequent ‘tummy troubles’, what I now know was anxiety related IBS. I didn’t talk about that either.

I’ve never been able to plan for my future. I plodded along, actively avoiding change if I could and dealing badly with the things I couldn’t avoid. I never gave myself I break. I was always afraid, but told myself that this was just an excuse and really I was lazy. I really don’t need anyone to stigmatise me, I do such a good job for myself. When I was at my lowest I was holding down a full time job, and working as a union rep. I often addressed groups of hundreds of people and had regular meetings with senior civil servants and government ministers. I was also the same person who would avoid a good friend in the street because I was terrified at the thought of starting a conversation. You really can’t carry on like that.

I was also the same person who would avoid a good friend in the street because I was terrified at the thought of starting a conversation. You really can’t carry on like that.

Since my diagnosis things have improved so much. Knowing what the problem is, and understanding the physical symptoms makes them easier to manage. I’ve used hypnotherapy and relaxation tapes. To be honest, I’ll try anything once – not every technique works for me, but I’ve found a few that do. I’ve done a lot of research into my personality type and what makes me tick. I take time for myself. It’s taken nearly twenty years, but I’m better at working out what I want to do and what I don’t. The old me would have said ‘no’ to wonderful, but frightening, opportunities and ‘yes’ to things that I didn’t want to do but involved displeasing someone. I can now say ‘Give me 10 minutes to think about that’ and I’ve found that usually people don’t have a problem with waiting and I can assess my real feelings.

I still think I don’t like surprises, not even nice surprises. I need to be as much in control as I can. I live with the fear every day, but I can usually reason with myself now and put it back in its box. At coming up for 54 I’m doing a further education course, and my first academic essays. I’m having a bit of a battle with dealing rationally with the feedback, but I’m getting there. I’ve even got a career coach, who’s job seems to be to put me as far outside my comfort zone as he can persuade me to go. And it’s all good. I’m finally looking to my future and how I can make the most of my experience and fulfill my potential. I’m starting to be active as a Time to Change Wales champion, and I’m seeing the difference that sharing my ‘silly’ fears can make. I feel like some sort of explorer, climbing the Everest of anxiety just because it’s there and because I can. Sometimes I fall, and sometimes I need to rest before I tackle the next stage. Sometimes I find I’m not on a path I like and retrace my steps. That’s fine. I’m still making progress. I’m happier than I’ve ever been. I still have difficult times. If you see me in the street and I don’t say ‘hello’, I may not have seen you or I may be having a hard day. Either way, sneak up on me and start a conversation. I’ll be glad that you did.