Only 29% of men know someone with a mental health problem. It’s time we asked the question on men’s mental health: ‘Are you alright?’

Time to Change Wales relaunches the Talking is a Lifeline campaign with new captivating videos of three men: Rhodri, Darren and Brian who talk openly about their mental health problems, to coincide…

Time to Change Wales relaunches the Talking is a Lifeline campaign with new captivating videos of three men: Rhodri, Darren and Brian who talk openly about their mental health problems, to coincide with men’s health awareness month this November.

The campaign aims to empower men to open up about their mental health struggles and emphasises that talking about mental health is one of the bravest things a man can do.

Rhodri, 37, from Cardiff used to play for Manchester United F.C. He was at the pinnacle of his career when he was blighted by significant knee problems throughout his time there, which contributed to him not succeeding at the club.

In his video, he talks about how he spiralled into depression following his exit from the club and how he dealt with the impact: “I couldn’t face going back home and seeing friends and family who expected me to do well by playing for a world-class team like Manchester United. I felt like I let everybody down.

I eventually came back to Wales and became a lot happier playing semi-professionally and was also studying for a business degree at the same time. In the end, I had to retire from football at the age of 24 as my knee problems continued be an issue.

Now I work as a freelance TV producer and I’m enjoying it. Talking about my poor mental health was the first step to my recovery, and I am living proof that you can definitely make the best out of what life throws at you.”

Darren, 37, from Flintshire walks along the River Dee in his video and talks about how stress in the workplace affected his mental health: “It was 2018 and I led on events that we run every year. We had 10 events to run over a matter of a few weeks. We had to cancel a lot of them due to snow and this was met with pressure from stakeholders to find alternative arrangements. I started to suffer from nosebleeds and became physically sick and before I knew it, I was in a very dark and scary place.

I contacted my manager to tell her that I was struggling and that I wasn’t sure what to do. I just unexpectedly burst into tears. My manager was worried and advised me to visit my GP as this was totally out of character. I visited my doctor, who diagnosed me with depression and anxiety. I was signed off from work and became increasingly withdrawn and isolated. Though, that was what I needed to reflect on myself. After taking some time off, I decided to build up the courage and head back into work and it was the best decision I’ve ever made. I was determined to not let my depression and low self-esteem hold me back.”

Half (48%) of all employees have experienced a mental health problem in their current job. Only half of these people have talked to their employer about their mental health problem. The cost of mental health problems in Wales is estimated at £7.2 billion a year in loss of output, healthcare bills and social benefits; which is why there is both a strong moral and business case to step up and create more mentally healthy workplaces.

Brian, 62, from Barry was diagnosed with depression a few years ago. In his video, Brian was filmed walking up South Wales’ highest mountain, Pen Y Fan, at sunrise. Brian felt that coming from a mixed ethnic background and growing up in a multicultural community made it difficult for him to open up about his mental health, due to the stigma that’s attached to it. He explains: “Over the years, I grew out of the idea that we must keep quiet about our mental health and built my own circle of friends who cared about my mental wellbeing. I became a lot more open about my feelings which gave me a sense of empowerment and freedom.

It wasn’t until I took full responsibility for my own mental health that I started to notice a change in myself. I started to develop a positive outlook on life and found solace in getting myself back in shape, by regularly going to the gym and completing strenuous walks up Pen Y Fan. It was my escapism.”

June Jones, Campaign and Strategy Lead for Time to Change Wales said: “Many men find it difficult to talk about their own mental health problem due to the stigma and discrimination that they face in society. It’s important to not feel ashamed or embarrassed if you think you may have a mental health problem. Talk to someone who you trust; a friend, family member or GP.

If you’re worried about a male friend or loved one, start a conversation, and ask the question, ‘are you alright?’ and be prepared to listen.”

Interviews with spokespeople and case studies

Interviews with Time to Change Wales spokespeople are available upon request. Case studies of people with experience of mental health problems are also available (including Rhodri, Darren and Brian who are mentioned in the press release). Photos from the campaign shoot are upon request.

Campaign videos of our three case studies can be found here: https://www.youtube.com/user/TTCWales/videos 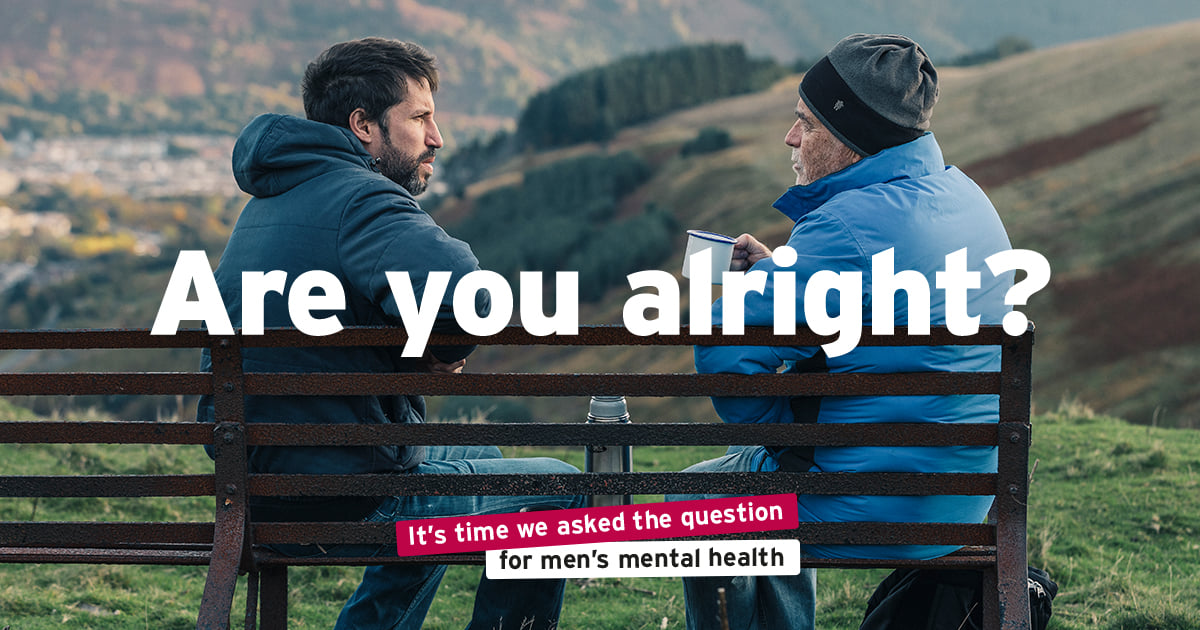