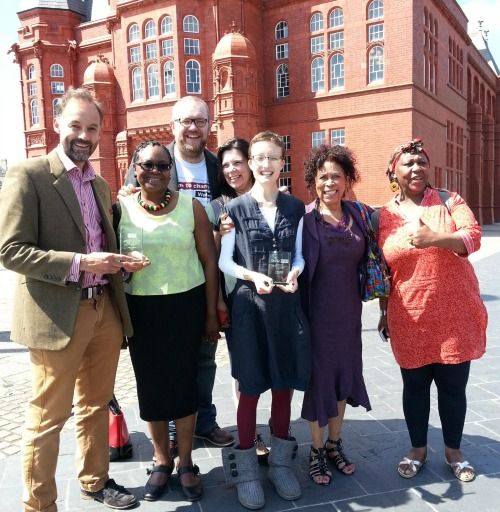 Time to Change Wales Champions were yesterday given an award for their huge achievements over the past year at the Welsh Council for Voluntary Action (WCVA) Wales Volunteer of the Year Awards.

Time to Change Wales Champions – volunteers with lived experience of mental health problems who campaign in their communities, workplaces and online to end the stigma and discrimination faced by people with mental health problems – were yesterday given an award for their huge achievements over the past year at the Welsh Council for Voluntary Action (WCVA) Wales Volunteer of the Year Awards.

Time to Change Wales Champion Manon Lewis became a double award winner, as she also won an award in the Young Volunteer of the Year category.

The WCVA event will take place at The Pierhead, Cardiff Bay.  A total of 17 winners in the six nomination categories of adults, young volunteers (under 25 years), international volunteers, groups, 'green' volunteers and trustees were presented with their awards by Welsh Government Minister for Communities and Tackling Poverty Jeff Cuthbert AM.

'We are proud to have in Wales a wealth of dedicated volunteers who give selflessly of their spare time to making a huge difference in the communities in which they live,' said Phil Jarrold, Acting WCVA Chief Executive.

'The Wales Volunteer of the Year Awards is the opportunity for us to repay their efforts by saying thank you on a national stage.'

Minister Jeff Cuthbert said: 'I am delighted to help commemorate and thank the many individuals and groups who voluntarily do great work across Wales. WCVA tell me that there are one million volunteers in Wales, and in a country of three million people that says something very important to us.'

The group award was collected by a small group of Time to Change Wales Champions, on behalf of over 300 Champions active throughout Wales. One Champion, Mark Smith, spoke at the event as he collected the group award, appealing to volunteers from all organisations in all parts of Wales to talk about mental health. ‘Imagine what a difference it would make if every volunteer in Wales started a conversation about mental health’, he said.

‘These awards are a great testament to the contribution and engagement made by those with lived experience who at the heart of Time to Change Wales. We are very proud to see this national recognition for all of the Champions who are involved in the campaign and are on a daily basis addressing stigma and discrimination surrounding mental health across Wales.’