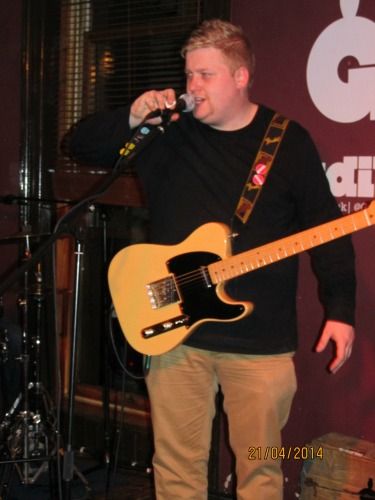 Newport indie rock band Maze played their debut gig in front of a full Gwdihw Café Bar in Cardiff on Monday night, with the proceeds donated to Time to Change Wales.

Newport indie rock band Maze played their debut gig in front of a full Gwdihw Café Bar in Cardiff on Monday night, with the proceeds donated to Time to Change Wales.

Challenging mental health stigma and discrimination is a cause close to singer and guitarist Rhys Hicks’ heart – he is a Time to Change Wales Champion and has written about his experiences of living with depression.

“The Gwdihw is a small, kitschy student venue filled with retro curios. The room was further adorned with Time to Change Wales bunting and balloons, two of which were taped hurriedly to a worse-for-wear deer’s head.

The room was buzzing by the time the main act, Rhys Hicks’s ‘Maze’ took to the stage. Rhys told me beforehand that he was incredibly nervous because he hadn’t played live for over two years. This didn’t show and Maze really were a tight, energetic unit that thundered through a set list which included classics and original compositions. Rhys gave a heartfelt thanks to Time to Change Wales as he explained his reason for organizing the event.”

“We’re born! It’s official! £240.12 is the grand total raised at our launch gig at @GwdihwCafeBar last night for @TTCWales #EndStigma”

Time to Change Wales Programme Manager Ant Metcalfe extended his thanks to the band on behalf of the campaign. He said:

“Rhys is a brilliant Champion who takes every opportunity to get people talking about mental health and challenge the stigma that he has experienced at first hand. I’m grateful to him and to the rest of Maze for using their very first gig to raise awareness of mental health issues and support Time to Change Wales.”

You can find out more about Maze here and read Rhys’ blogs for Time to Change Wales here and here.

Check out some great photos from the launch gig on their Facebook page and on our Flickr page.