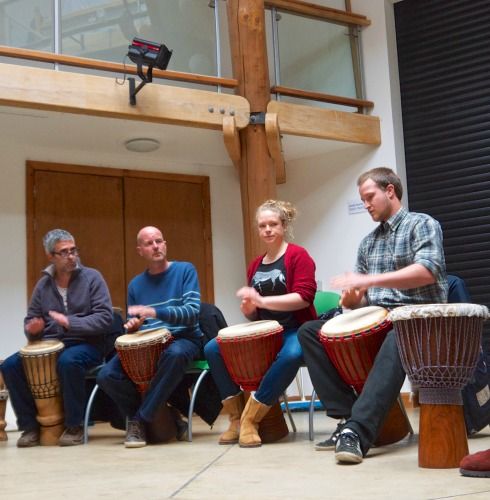 More than 60 people filled the Small World theatre, Cardigan on Saturday for MaDCaff, Ceredigion’s all-new open cafe, showcasing the talents of musicians who are affected by mental health.

More than 60 people filled the Small World theatre, Cardigan on Saturday for MaDCaff, Ceredigion’s all-new open cafe, showcasing the talents of musicians who are affected by mental health.

People came to enjoy an eclectic variety of music and dance acts, performed by people living with mental illness and to take the opportunity to get talking about mental health.
On arrival MaDCaff guests were treated to Rachel Hargrave on djembe (drum) and Peter Stacey on Balafon, a wooden xylophone with gourds underneath to carry the sound out.
After getting settled in with tea and cake, the event was opened by Miranda Betts, MaDCaff founder.

Singer-songwriter and guitarist, Dai Sharkey got the performances started. Dai’s songs were an eclectic mix of original material, and included songs from his recent album ‘Schizophrenic’.
Next up were the Crazy Beaches, MaDCaff’s very own ‘house-band’ featuring Miranda Betts on ukulele, Lucy Edwards on guitar, and Hannah Schafer on bass. They performed an entertaining cover of the standard, ‘All of Me’, followed by two of Miranda’s own songs, ‘Bluebells’ & ‘Country Girl’.

Then came some amazing spoken word poetry from Helen Lovell, a London-based performance poet, about her experience of being in an asylum and suffering with depression. This was followed by an endearing poem about her first kiss.

The crowd was then treated to the guitar of Tom Gray. Tom played a couple of stunning arrangements of jazz standards.

Maggie Nicols, jazz vocalist from Drefach Felindre then wowed the audience with her haunting rendition of Joni Mitchell’s ‘Blue’, as well as playing a couple of her own self-penned songs, ‘Vivid Black’, a love song to the dark, and ‘Change’ a song about holding on when things get tough.

Rachel Hargrave’s drum group, who meet weekly at Small World, then played and got people up and dancing immediately!

The feedback received from the event was great, so thanks to everyone who stuck stickers or wrote their comments on the feedback sheets

This was followed by a music and dance piece from Marc Gordon and Miranda Betts. Miranda explained that she was heavier/fatter than usual, due to the mental health medication she takes, but that this did not deter her from performing a short improvisation with guitarist Marc Gordon.

Last, but by no means least, were Wi-fi Banana, Steve Acworth and Lucy Edwards who met at the previous MaDCaff, with their thrilling version of Fever, and Careless love.

At the end of the evening there was still time for all the musicians to jam together. ‘This was one of the highlights of the event,’ said Miranda Betts, founder, as people were actually playing together for the first time, and all this was happening as volunteers were packing up the event.
MaDCaff is funded by Time to Change Wales, the first national campaign to end the stigma and discrimination faced by people with mental health problems.

Programme Manager Ant Metcalfe said: ‘MaDCaff has been a huge success! It’s great to see people using music, dance and creativity to start conversations about mental health. After all, you don’t have to be an expert to be a good friend - just asking someone how they’re feeling can make a real difference. MaDCaff is a really fun way of starting those conversations and getting people together, but it hopefully also gives people the confidence to talk about mental health in their day to day lives. If you missed it, make sure you get to the next event!’

MaDCaff are very excited about the next event which takes place at the Morlan Centre, Aberystwyth, on Friday May 16th, from 4.30pm-7pm. Everyone is welcome.

The feedback received from the event was great, so thanks to everyone who stuck stickers or wrote their comments on the feedback sheets. There will be more ways than ever to give us your feedback at the next MaDCaff. Alternatively, go to our website and leave us your comments there. http://madcaff.wordpress.com/event-feedback/
All in all a good time was had by all.

Mental health problems affect 1 in 4 people in any year; it could be you, someone in your family, a friend or colleague. Time to Change Wales is the first national campaign to end the stigma and discrimination faced by people with mental health problems in Wales. For further information contact Miranda on westmadcaff@gmail.com. Or look us up on Facebook or at our Blog, madcaff.wordpress.com.
The MaDCaff Project is funded by Time to Change Wales and supported by Disability Arts Cymru.