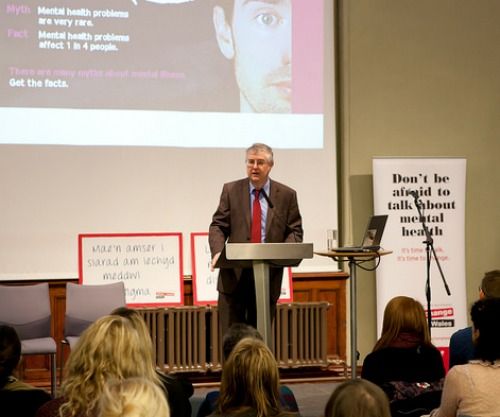 Time to Change Wales celebrated its second birthday with a showcase event at the Pierhead building in Cardiff, in which Health Minister Mark Drakeford delivered a keynote speech and TTCW Champions…

A generation’s work to end the stigma around mental illness

As Time to Change Wales celebrated its second birthday with a showcase event at the Pierhead building in Cardiff Bay this week, campaign manager Ant Metcalfe said that the campaign had established a foundation for changing attitudes towards mental illness and was seeing real progress, but ending the stigma faced by people with mental health problems in Wales was the work of a generation.

The event highlighted the campaign’s successes, including the creation of a network of two hundred Champions, people with experience of mental health problems actively campaigning in their own communities and workplaces to change attitudes and break the taboo surrounding mental health problems, which affect one in four people each year.

“As we heard directly from TTCW Champions speaking at our event at the Pierhead building, stigma and discrimination remain huge issues for people with mental health problems in Wales. Stigma can make it harder to do everyday things such as maintain an active social life or find work, as well as stopping people from getting help and making a recovery.

There’s real progress being made to end mental health stigma and discrimination, driven by our Time to Change Wales Champions who are active in communities around Wales, within organisations and online, forming a real movement for change. It will take a generation to end mental health stigma and discrimination but by sharing their experiences, Time to Change Wales Champions are starting conversations about mental health right across Wales and bringing us closer to a point where people talk as openly about mental health problems as they would a broken leg.

Seeing so many people, including Champions, Assemby Members and business leaders at the Pierhead gives me confidence that we will achieve this goal.”

Minister for Health and Social Services Mark Drakeford AM delivered a keynote address at the Pierhead building event, in which he paid tribute to the campaign and spoke of the need to challenge stigma in the workplace.

“Today’s event focusses on the lived experience of those suffering from mental health problems, how they face overcoming stigma and discrimination in the work place and in their personal lives. This first hand experience is rightly at the heart of everything that Time to Change does, and is a potent tool in fighting discrimination.

“The work carried out by Time to Change over the last two years to tackle the stigma that still exists around mental ill-health is crucially important for the progression of an understanding, healthy society and they deserve credit for all their efforts towards that aim.”

The work of Time to Change Wales Champions featured prominently in the event. The speakers included Mark Smith, who has worked with the campaign for almost two years. Speaking after the event, he said:

“For me, it was a unique event because of the coming together of so many people whose lives have been touched in some way by mental ill health. Yet, despite that, many of those present have taken it upon themselves to become part of this social movement. I was honoured to share the stage with some amazing people and to have the opportunity to share my involvement in the campaign. I shared a number of positive conversations with people, you felt as though it could have gone on much longer.

It was also a pleasure to meet the Health Minister, Mark Drakeford, and to briefly tell him about the project that Time to Change Wales is funding with Making Minds - a mental health arts organisation that I'm helping to develop.

It's difficult to briefly state the difference that Time to Change Wales is having, because it's moving at such a pace and is breaking new ground all the time. It's definitely changing people's attitudes towards mental health, educating and informing people along the way. Mental health is becoming a more socially acceptable topic of conversation in Wales.”

Kate Macnamara is a Champion who featured in the most recent Time to Change Wales advertising campaign. Speaking after the event, she said:

"The event was amazing! It was wonderful to see so many people who are passionate about ending stigma coming together. Listening to the stories of those who spoke was really moving and I have come away feeling inspired and motivated to get as involved as I can!

Time to Change Wales has made a huge difference to my life and that of many other champions I know. It's a ripple effect - through my work with TTCW I have become much more open about my condition, which has helped build my confidence and self-esteem. I think seeing this change has given those around me, colleagues and friends, the courage to start talking about their own experiences more. They have then gone out and talked to others - it just keeps growing! The potential for the message to spread is huge."

You can see photos from the event at our Flickr page.