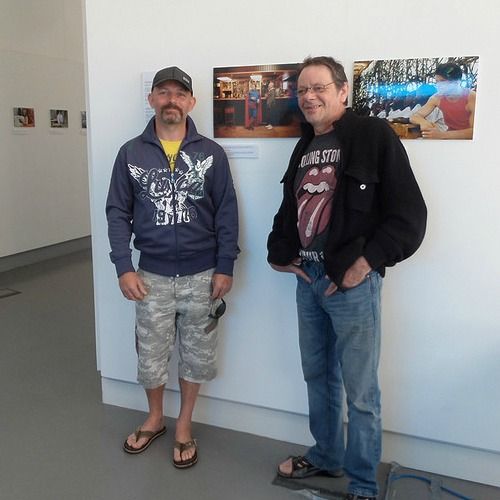 A photography exhibition celebrating the contribution made by volunteers in Wales is now on display at the National Waterfront Museum in Swansea. The winning entry was taken by Kieran Ridley for Time…

A photography exhibition celebrating the contribution made by volunteers in Wales is now on display at the National Waterfront Museum in Swansea.

The top 15 selected are exhibited at the display until this Sunday (July 13), and will later be on show at the WCVA’s stand at the National Eisteddfod in Llanelli from 2-9 August.

The winning entry was taken by Kieran Ridley for Time to Change Wales (TTCW), the first national campaign to end the stigma and discrimination faced by people with mental health problems in Wales. It was taken as part of TTCW’s ‘Be Extraordinary’ campaign last year, which featured Time to Change Wales Champions – volunteers with personal experience of mental illness – along with friends, family members and colleagues dressed as ninjas, astronauts and other ‘extraordinary’ characters to show that anyone can make an extraordinary difference when someone they know experiences mental health problems just by being a friend.

“The response from people has been brilliant, I think the whole campaign has hit a chord with people and opened up a line of conversation which after all is the point of the campaign - to get people talking.

The day of the shoot was real fun, Pete and I came away with a great pic that not only helped lift the campaign with some humour but something that we are both proud to be a part of. I also think that the ‘super hero’ sandals and specs made the shot natural yet surreal. Many people have seen us propping up the bar like that - not in hero costume but in that setting nevertheless.

Out of the other pics in the campaign my favourite is Manon and her spaceman Dad - brilliant, again with humour in a completely natural setting.”

Time to Change Wales Programme Manager Antony Metcalfe said: ‘We’re delighted to have won this award. Sharing the experiences of people living with mental health problems is at the heart of everything we do, so it’s wonderful to get this recognition for our Champion Dai and his friend Pete, who are the stars of the photo - and for all the other Champions who posed for photos and shared their stories to show that anyone can be “extraordinary” by being a friend when someone has a mental health problem.”

The National Waterfront Museum is part of Amgueddfa Cymru – National Museum Wales, has free entry and is open seven days a week, from 10am-5pm.

“The National Waterfront Museum is really proud to be hosting the WCVA photographic competition once again.

As someone who started my career as a volunteer in a museum, I know that volunteering is a fulfilling and rewarding experience and these great photographs show that. Our museum is all about the work that Welsh people have done for the last three centuries and we’re really happy to show that volunteers are a vital part of the national workforce.”

For further information contact Gethin Jones, and you can see photographs here.