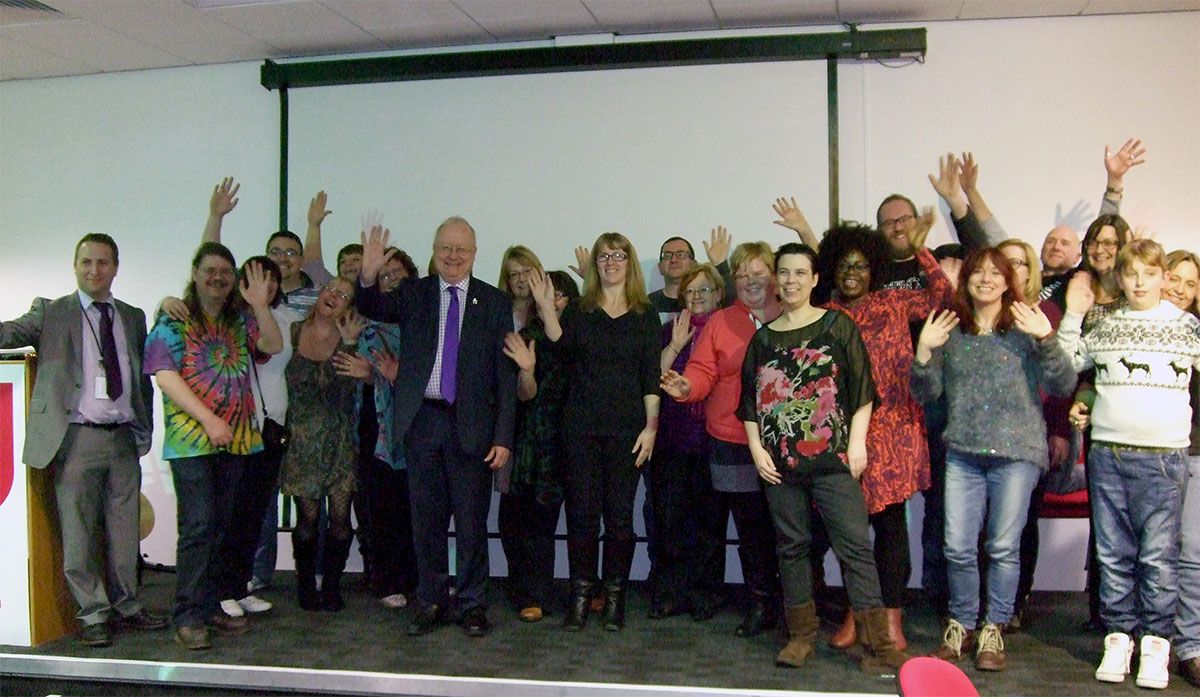 Creative Champions ‘Step Up to End Stigma’ in RCT

Creative Champions ‘Step Up to End Stigma’ in RCT

On Thursday 27th November anti-stigma champions joined members of the local community in Rhondda Cynon Taff to showcase their creative talents and celebrate their achievements as part of Time to Change Wales, the first national campaign to end the stigma and discrimination facing people with mental health problems.

The Step Up to End Stigma event, held at the Glamorgan Conference Centre in Pontypridd, was supported by Leighton Andrews AM, who raised funds for the campaign in 2013. In his speech, the Rhondda Assembly Member praised TTCW Champions for speaking out about their experiences of mental health problems in order to educate people, challenge negative attitudes and tackle stigma and discrimination.

The event featured music, poetry, digital stories and art work from a number of inspirational TTCW Champions who have used their creativity to challenge mental health stigma and discrimination across south Wales. Many of the individuals and groups have received funding and ongoing support from Time to Change Wales as part of the campaign’s social leadership activities.

Mark Smith is from the RCT area and showcased the work of his TTCW supported project Making Minds Creative Challenge, which took place in RCT and involved young people participating in creative activities to explore issues mental health recovery, stigma and discrimination. Mark has also appeared in a recent TTCW marketing campaign which encouraged people to #BeExtraordinary and talk about mental health.

Beth Lewis is from RCT and showed a digital story about her diagnosis of psychosis, how this affected her as a Music and Technology student at the University of Glamorgan (now the University of South Wales) and the help she received from student services, Gofal and Merthyr and the Valleys Mind.

Bel Blue is a singer songwriter from south Wales who informs audiences about her own battles with mental health through her songs. Bel performed with violinist Heulwen Thomas who is well known on the folk/jazz music scene in Wales.

Will Ford is a poet and member of the TTCW funded project Were 4 Real Collective. This is a group of creative artists from across south Wales who worked together to organise a series of events to challenge stigma and discrimination within the creative arts world. Will performed a number of original poems at the Step Up to End Stigma event.

Mad Tom’s Crowd, featuring Rhian Otter, are from south Wales. MTC are well known on the music scene in Wales and are considered to be mental health activists who highlight the issues of stigma and discrimination through their music – but in a fun way! They closed the Step Up to Stigma event with a number of lively performances.

“People with lived experience are at the heart of the Time to Change Wales campaign, starring in our advertising campaigns, leading a range of community projects and delivering stigma busting presentations in workplaces across Wales.

“We are incredibly proud of our Champions, who have made a real impact on people’s attitudes towards mental health and we are grateful for the ongoing support of Rhondda Assembly Member Leighton Andrews.

“However, there is much more to do and we must continue educating, empowering and inspiring people so that we can achieve our aim of ending stigma and discrimination in Wales.”

“The Step Up to End Stigma event showcased some fantastic art, music, stories and poetry and I am delighted that the funds raised by Rhondda Labour have been used to celebrate the achievements of Time to Change Wales Champions here in Rhondda Cynon Taff.”

“I am proud to have supported the campaign since its launch in February 2012 and I pay tribute to all of the TTCW Champions who have spoken out about their experiences of mental health problems in order to educate people and tackle stigma.

“With one in four people experiencing mental health problems it is essential that we work together and promote the message that it’s time to talk about mental health.”

Mark Smith a TTCW Champion from RCT and founder of Making Minds, said:

“It has been a fantastic experience running the Making Minds Creative Challenge project and working with a range of creative individuals in RCT.

“Involvement in the arts supports good mental health and we are proud that our project has provided learning, creative and social opportunities to support wellbeing and facilitate discussions about mental health.”