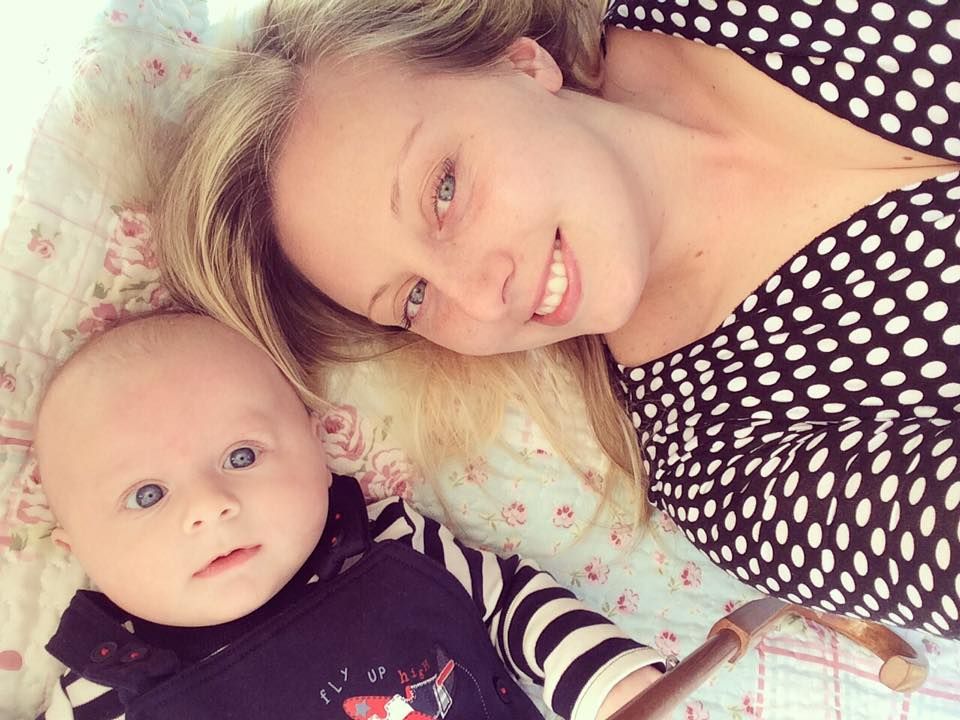 My name’s Holly, I’m a 29 year-old project Manager with a Master’s Degree and Mental Health issues. I’m sharing my story of living with anxiety and developing post-natal anxiety and depression to raise awareness and end the stigma around mental illness.

I’ve always been a very anxious person, but up until two years ago, I had never taken any medication or had any therapy for my anxiety. I would always pass it off as being part of who I am:

‘I have weird phobias’

Nobody would ever guess I have anxiety as I’m outwardly confident and sociable. But absolutely anyone can suffer from a mental disorder. Growing up I had a phobia of vomiting or other people around me feeling / being sick. I would become hot, sweaty and shaky if someone at school said they felt sick at class – at the time I didn’t realise that this was a panic attack. If I saw somebody vomiting it would play over and over in my head for days or even weeks. I remember summer holidays aged 12 feeling nauseous and thinking:

‘I would rather die than be sick’

‘Why do I feel this way? Is this normal?’

At University I developed a phobia of public transport or being in any situation, such as a lecture, where I couldn’t go to the toilet if I needed too. I would involuntarily cry, shake and sweat before going on a bus or entering an exam room. I would never let anxiety stop me from achieving anything, and despite quietly suffering with this mental disorder, I graduated with a Master’s Degree in 2013.

I am a firm believer of facing my fears, and decided to volunteer in Cambodia for 3 months in 2015, to conquer my anxiety; by travelling to the other side of the world and putting myself in situations that I knew would make me feel anxious. In the past few years, as I’m nearing 30, I’ve also developed a fear of death. So it’s safe to say that I should have seen post-natal anxiety coming. But I didn’t.

Post-natal anxiety is the scariest thing that I have every faced.

Post-natal anxiety is the scariest thing that I have ever faced. No physical pain or fear could even come close to the sheer terror I felt in the months after my son’s birth. Not even the birth itself.

It was nothing like I had ever experienced before. It made me feel like I was turning into a monster. At the beginning I had no idea that it was ‘just anxiety.’

It didn’t start until nearly a month after giving birth. Just as I had started to get the hang of caring for my new born baby I had my first ‘what if…’ thought that paralysed me with fear and made the atmosphere around me instantly shift.

I believed that the terrifying ‘what if…’ thoughts about my baby were real. Any ‘what if’ thought suddenly felt dangerous and as though I could potentially act on it just by the mere fact that I had thought it.

I should also add here that I had a somewhat traumatic birth, which didn’t set me off on a good foot. My 16 hour labour, which started with me doing happy dancing around my bedroom, ended in an emergency C-section. Previous mental health issues and a traumatic birth can all contribute to developing post-natal anxiety and depression.

The midst of post-natal anxiety

I didn’t dare tell anyone about the thoughts I was having in case they thought I was a dangerous person and take my baby away from me, so I let them gnaw away at me; analysing every detail and searching deep into my soul for any signs in my past that I could become a dangerous person.

I was constantly on edge for months. I had flashing images accompanying the scary thoughts in my mind. Any news stories would sound in my head for days afterwards. The harder I tried not to think about the ‘what if’ scenarios, the more I thought about them.

I remember holding my son and looking at myself in the mirror but I couldn’t see my reflection because of the thoughts deafening my vision. I started to become depressed from the constant nightmares playing on repeat in my mind.

‘Maybe I wasn’t ever meant to be a mum’

It was only when I started thinking ‘Maybe I wasn’t ever meant to be a mum’ that the relentless chatter in my mind stopped momentarily, as I felt like I had read that exact line in a pregnancy text book.

I began to realise that I must have some form of post-natal depression. I confided in my good friend Dr google, and felt a slight relief that I wasn’t losing my mind or going to turn into a monster, but actually, I was incredibly ill. I had such a supportive family and the most understanding partner I could ever wish to be with. He never gave up on me and was never phased by anything that came out of my mouth.

The perinatal mental health team were outstanding. I was so embarrassed about telling the doctor about my thoughts. I sat with tears rolling down my cheek looking out the window as I began to let him into the deep darkness of my mind. He just smiled and told me it was classic post-natal anxiety and depression. I wasn’t a monster, I was just very anxious, and sensitive to any passing thoughts.

You would think that being told this by a professional, that the anxiety would instantly go away. But it didn’t. I still needed constant reassurance. I was put on medication to help ease my anxiety and attended an 8 week support group with other mums suffering with post-natal mental health disorders.

I met so many incredibly strong and brave women in that support group who were all pivotal to my recovery. We recently met up for a Christmas meal and talk most days, years after the group has finished. I’m sure we will be friends for life as we all know the ins and outs of how each other’s minds work.

I didn’t initially want to be put on medication, as I was scared about the potential side effects, but when my baby turned 3 months old I decided I needed to take them. There’s no shame in needing help and taking tablets to get better.

"Despite suffering with this exhausting illness, I didn’t let it hold me back. I went out to baby groups most days, took my baby swimming and went on several West Wales holidays. I did everything I would have done if I hadn’t been ill, because I was determined that I would conquer my anxiety, and continuing to do ‘normal’ things was the only way I knew how to face my fears." 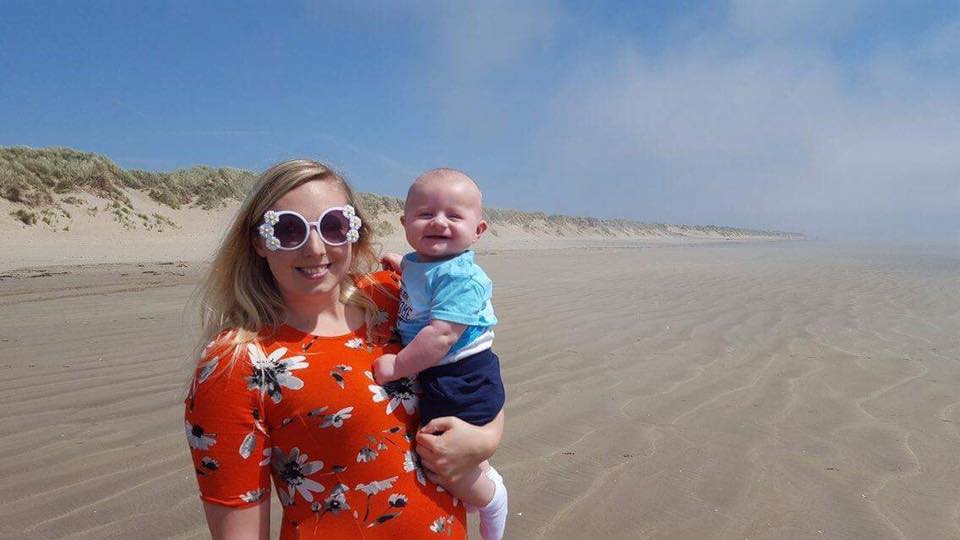 I didn’t let it hold me back

Despite suffering with this exhausting illness, I didn’t let it hold me back. I went out to baby groups most days, took my baby swimming and went on several West Wales holidays. I did everything I would have done if I hadn’t been ill, because I was determined that I would conquer my anxiety, and continuing to do ‘normal’ things was the only way I knew how to face my fears.

Although sitting in a baby group with a smile on my face, whilst having scary racing thoughts about my baby, sometimes made me feel like a psychopath, I pushed through; determined as ever to be a ‘normal’ mum and not let the thoughts defeat me.

Returning to work after maternity leave was the real peak of my recovery as I began to build my old sense of identity back and focus on something other than being a mum. After 1 year of taking medication I slowly weaned off the tablets. It’s now approx. 9 months since coming off medication and although I will always have a level of anxiety, as I feel it’s part of who I am, the ugly post-natal anxiety and depression is far behind me.

Having post-natal anxiety and depression has ultimately made me a better person and a better mother. I now know how my mind works and how to manage my anxiety.

I take much better care of myself now; both physically and mentally. I have an amazing network of supportive friends and family who I’ve never felt closer too. I am more mindful and grateful for the little things that make me happy. I never knew how strong and brave I was until I experienced post-natal anxiety.

Being kind to ourselves in lockdown #MHAW2020

"At a time where suffering is a global commonality, kindness is easy to practice and makes a huge difference. Being kind is usually seen as something we do for others, but for me, being kind to myself is just as important and can be much more…

Why I became a Time to Change Wales Champion

Connor wrote a blog about why he chose to be a Time to Change Wales Champion and how it has helped him to share his story, gain new skills and meet new people.